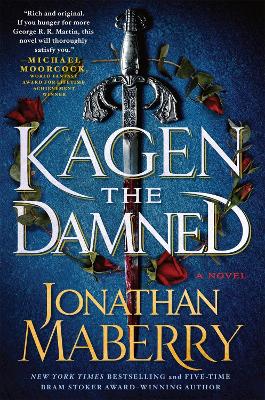 Kagen Vale is the trusted and feared captain of the palace guard, specifically charged with protecting the royal children of Gessleyn, 89th queen of the unbroken line of the Silver Lands. But one night, while Kagen is drugged by a woman in a tavern, the Silver Lands are overrun, and the entire royal family is killed and burned as a sacrifice to the dark gods of the immortal Witch-King. The once-thriving kingdom is in ruins, and the people are enslaved. Haunted and broken, Kagen becomes a wanderer, working odd jobs and trying to take down as many of his enemies as possible, when he hears a rumor that the royal twins are still alive, and possibly being raised for dark sacrificial purposes. Kagen makes it his mission to hunt for the royal children and fulfill his oath to protect them, and train them to begin a campaign to reclaim the throne. As he hunts for the children, Kagen' s quest takes him to strange lands where he encounters the supernatural in all its many bizarre and terrifying aspects.

- Titles in the Series -

Mr. Maberry' s first venture into Sword and Sorcery fiction employs powerful imagery to tell a classic tale of revenge and blood which fans of Howard, Moore and Wagner will relish! As his own story grows deeper and more complex, Kagen of Argentium discovers the bizarre answers to more than one mystery. He fights with magnificent skill and fury to restore an empire, unearth the secrets of unimaginably ancient peoples and discover the horrifying truth behind his family' s betrayal. Maberry gradually expands his story until it flows beyond the borders of his chosen genre to create something rich and original. If you hunger for more George Martin, this novel will thoroughly satisfy you. And if you love Lovecraft, you' re in for something very special! --Michael Moorcock, World Fantasy Lifetime Achievement Award-winner "Jonathan Maberry' s sojourn into fantasy with Kagen the Damned is a bawdy, brutal, swashbuckling start to a magnificent epic in the making. It' s sword & sorcery the way I like it: violent, bloody, but with beautiful awe-inspiring moments of wonder. So buckle on your own sword and join Kagen on this grand adventure. You won' t be disappointed. " --James Rollins, #1 New York Times bestseller of The Last Odyssey "Jonathan Maberry is definitely channeling Robert E. Howard, H. P. Lovecraft, and L. Sprague De Camp--this is a great novel with sharp swords, elder gods, mythical cities, and heroes who will become legends. " --Kevin J. Anderson, New York Times bestselling author of Dune: House Atreides and Spine of the Dragon. Kagen the Damned is the best sword and sorcery book I have read in the last ten years. Fans of Joe Ambercrombie, Pat Rothfuss, Mark Lawrence, and Robert E. Howard are going to love this. --Weston Ochse, author of Seal Team 666 Kagen the Damned is a gloriously nuanced, exceptionally brutal epic fantasy crossed with cosmic horror that manages to mine new material out of a very familiar space. It' s thoughtful, beautiful, awful, fresh, and very, very welcome. --Seanan McGuire, author of When Sorrows Come "This book is violently honest and honestly violent about the horrors of war. Unrelenting action that plunges the reader into the world. The ending is satisfying, but readers will still want more of Kagen. Kagen combines the characters of Conan and Elric into a believable melancholy hero. "-- Robin Hobb, New York Times Bestselling author If epic battles, intrigue, quests, heroes & villains, history written by the victorious vs the defeated ones' version, and unanswerable questions pique your interest you won' t want to sleep on this one. -- Aimeereads. com . . . fantasy readers will be spellbound by the intricate worldbuilding and the delightful cast. This is a promising start. --Publishers Weekly

JONATHAN MABERRY is a New York Times bestselling, Inkpot winner, five-time Bram Stoker Award-winning author of Relentless, Ink, Patient Zero, Rot & Ruin, Dead of Night, the Pine Deep Trilogy, The Wolfman, Zombie CSU, and They Bite, among others. His V-Wars series has been adapted by Netflix, and his work for Marvel Comics includes The Punisher, Wolverine, DoomWar, Marvel Zombie Return and Black Panther. He is the editor of Weird Tales Magazine and also edits anthologies such as Aliens vs Predator, Nights of the Living Dead (with George A. Romero), Don' t Turn out the Lights, and others.