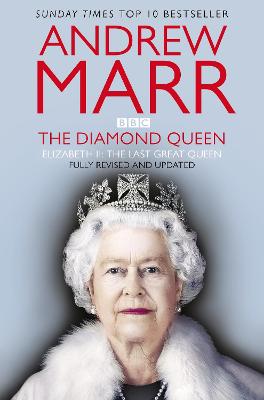 Sunday Times Top 10 Bestseller, fully revised and updated with a new chapter. ' Absorbing . . . particularly acute on the political aspects of constitutional monarchy, but he also writes perceptively about individual members of the Royal Family. ' Daily TelegraphWith the flair for narrative and the meticulous research that readers have come to expect, in The Diamond Queen Andrew Marr turns his attention to the monarch, chronicling the Queen' s pivotal role at the centre of the state, which is largely hidden from the public gaze, and making a strong case for the institution itself. Arranged thematically, rather than chronologically, Marr dissects the Queen' s political relationships, crucially those with her Prime Ministers; he examines her role as Head of the Commonwealth, and her deep commitment to that Commonwealth of nations; he looks at the drastic changes in the media since her accession in 1952 and how the monarchy has had to change and adapt as a result. Under her watchful eye, it has been thoroughly modernized but what does the future hold for the House of Windsor? This edition, fully revised and updated, features a new introduction and a new chapter that sets out to answer that crucial question. In it, Marr covers the Queen' s reign from the Diamond Jubilee to the run-up to the Platinum Jubilee in 2022, taking in the death of the Duke of Edinburgh, Prince Charles' s plans for the future of the monarchy and examines what Elizabeth II' s lasting legacy might be.

Marr' s writing is persuasive, liberal, energized * Observer * Marr has a gift for narrative and precis, a pithy turn of phrase and an ability to unearth the familiar * The Times * Absorbing . . . particularly acute on the political aspects of constitutional monarchy, but he also writes perceptively about individual members of the Royal Family. * Mail on Sunday * Contain[s] a lot of information which will be new to any but the most dedicated student of the monarchy . . . Marr is particularly interesting on the relationship between the Queen and the BBC. -- Philip Ziegler * Spectator * An exploration of the day-to-day duties of the monarch and her family. * Daily Telegraph * Offers the reader a history of the Queen' s reign viewed from the outside, with a particular emphasis on her relations with her prime ministers and the connection between political developments and the monarchy' s shifting fortunes . . . an overwhelmingly positive endorsement of the Queen' s remarkable record. -- Matthew Dennison * Express * A fresh perspective . . . Marr looks at the people and broader historical trends who have shaped Elizabeth II' s approach to her reign . . . fascinating -- Carolyn Harris, author of Raising Royalty

Andrew Marr was born in Glasgow in 1959. He studied English at the University of Cambridge and has since enjoyed a long career in political journalism, working for the Scotsman, the Independent, the Daily Express and the Observer. From 2000 to 2005 he was the BBC' s Political Editor. He has written and presented TV documentaries on history, science and politics, and for many years presented the weekly Andrew Marr Show on Sunday mornings on BBC1 and Start the Week on Radio 4. He left the BBC at the end of 2021 to join LBC, Classic FM and the New Statesman. He lives in London with his family.