Armies of the Second World War: Defeat and Division 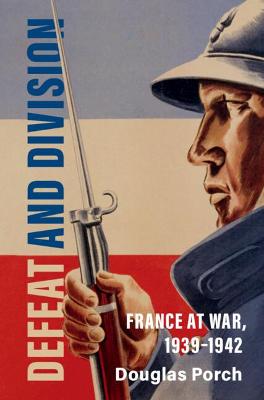 Defeat and Division launches a definitive new account of France in the Second World War. In this first volume, Douglas Porch dissects France' s 1940 collapse, the dynamics of occupation, and the rise of Charles de Gaulle' s Free France crusade, culminating in the November 1942 Allied invasion of French North Africa. He captures the full sweep of France' s wartime experience in Europe, Africa, and beyond, from soldiers and POWs to civilians-in-arms, colonial subjects, and foreign refugees. He recounts France' s struggles to reconstruct military power within the context of a global conflict, with its armed forces shattered into warring factions and the country under Axis occupation. Disagreements over the causes of the 1940 debacle and the subsequent requirement for the armistice mirrored long-standing fractures in politics, society, and the French military itself, as efforts to reconstitute French military power crumbled into Vichy collaboration, De Gaulle' s exile resistance, Alsace-Moselle occupation struggles, and a scuffle for imperial supremacy.

- Titles in the Series -

Defeat and Division: France at War, 1939-1942
British and Commonwealth Armies and the Second World War

' A clear-eyed, ambitious and myth-busting account that places the Fall of France in 1940 and De Gaulle' s Free French in a wider scenario that sees Vichy France and its colonial empire as a serious military player down to 1942. A tour de force by a historian who is a master of his craft. ' Robert Gildea, author of Fighters in the Shadows: A New History of the French Resistance ' This superb and ambitious book will fill a very substantial gap (and puzzling) in the massive literature on the history of the Second World War. Douglas Porch has mastered an impressively diverse literature on the military, imperial, diplomatic, cultural and social history of France at war. This material is synthesised and combined with extensive work in the French archives to produce an important and original reinterpretation of France' s wartime experience that will serve as a standard work for years to come. ' Peter Jackson, author of Beyond the Balance of Power: France and the Politics of National Security in the Era of the First World War ' Comprehensive and encyclopaedic in its coverage, Defeat and Division is destined to become an invaluable resource for understanding the war in Europe. Porch has given us new lenses through which to see and understand the French war. ' Michael Neiberg, author of When France Fell: Vichy and the Fate of the Anglo-American Alliance ' Douglas Porch has produced an important and much-needed new look at the darkest period in French history. Defeat and Division is a deeply researched, robustly argued and entertainingly written history of a France destroyed by the weaknesses of its own leadership. This is a book that anyone interested in the Second World War or modern French history should read. ' Phillips O' Brien, author of How the War was Won: Air-Sea Power and Allied Victory in World War II

Douglas Porch is Distinguished Professor Emeritus and former Chair of the Department of National Security Affairs at the Naval Postgraduate School in Monterey, California. His previous books include Counterinsurgency: Exposing the Myths of the New Way of War, The Path to Victory: The Mediterranean Theater in World War II (published in Britain as Hitler' s Mediterranean Gamble), The French Secret Services: From the Dreyfus Affair to the Gulf War, The French Foreign Legion: A Complete History of the Legendary Fighting Force, The Conquest of the Sahara, The Conquest of Morocco, The March to the Marne: The French Army 1871-1914, The Portuguese Armed Forces and the Revolution, and Army and Revolution: France 1815-1848.