Four Decades of Hollywood Through One Singular Career 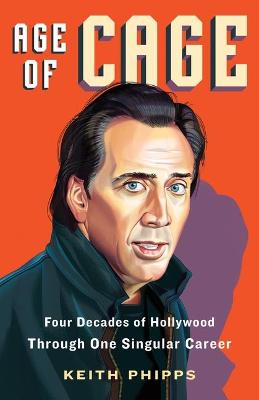 Nicolas Cage is many things, but love him, or laugh at him, there' s no denying two things: you' ve seen one of his many films, and you certainly know his name. But who is he, really, and why has his career endured for over forty years, with more than a hundred films, and birthed a million memes? Age of Cage is a smart, beguiling book about the films of Nicolas Cage and the actor himself, as well as a sharp-eyed examination of the changes that have taken place in Hollywood over the course of his career. Critic and journalist Keith Phipps draws a portrait of the enigmatic icon by looking at-what else? -Cage' s expansive filmography. As Phipps delights in charting Cage' s films, Age of Cage also chronicles the transformation of film, as Cage' s journey takes him through the world of 1980s comedies (Valley Girl, Peggy Sue Got Married, Moonstruck), to the indie films and blockbuster juggernauts of the 1990s (Wild at Heart, Leaving Las Vegas, Face/Off, Con Air), through the video-on-demand world of today. Sweeping in scope and intimate in its profile of a fiercely passionate artist, Age of Cage is, like the man himself, surprising, insightful, funny, and one of a kind. So, snap out of it, and enjoy this appreciation of Nicolas Cage, national treasure.

"Hollywood' s most-loved eccentrics is celebrated in pop culture journalist Keith Phipps' s lively career retrospective. Grab some KFC and champagne and curl up on the couch for a deep dive into some classic Cage Rage. " --Yahoo! Entertainment"Film critic Phipps draws a portrait of enigmatic and surprising actor Nicolas Cage with this deep dive into his rich filmography spanning four decades. " --USA Today"In the wildly entertaining Age of Cage, Keith Phipps paints an addictive, anecdote-rich portrait of Hollywood' s most eccentric and singular leading man--an actor for whom the only predictable thing is his unpredictability. Through the cracked prism of Nicolas Cage, the author shows us not only what makes Tinseltown' s last big-screen iconoclast tick, but also the ways that the movie business has changed (for better and worse) over Cage' s unique four-decade career. From Valley Girl to Raising Arizona, Wild at Heart to National Treasure, Phipps proves there' s a Method behind his subject' s infamous madness. " --Chris Nashawaty, author of Caddyshack: The Making of a Hollywood Cinderella Story"If Nicolas Cage didn' t go over the top, how would we know where the top was? Age of Cage is the entertaining story of the actor' s journey to the summit--and beyond. " --Gavin Edwards, New York Times bestselling author of The Tao of Bill Murray "Age of Cage is a sharply perceptive and definitive examination of Nicolas Cage, the greatest living actor among those who can seem like the worst. Keith Phipps is not only alert to the contradictions of this fascinating movie star. He makes sense of them. In illuminating his oddball career and singularly eccentric artistic style, he evokes a fertile cultural era. An entertaining, essential cultural history. " --Jason Zinoman, New York Times bestselling author of Letterman: The Last Giant of Late Night and Shock Value"Age of Cage might be the closest we will get to understanding the singular beauty of each of Nic Cage' s always electric performances. Phipps pieces together how those performances were approached and created from an actor who is normally tight lipped. You are holding the Rosetta Stone for Cage. Enjoy it. " --Paul Scheer, actor, writer and host of the How Did This Get Made? and Unspooled podcasts"[Age of Cage] juxtaposes insightful analyses of Cage' s films with helpful film history about a fickle industry searching for the next fad or copying the latest hit. . . fans will relish this refreshing, extensive assessment of the mercurial, prolific actor. " --Kirkus"An entrancing look at the actor' s transformation. Even in underlining Cage' s chameleon-like genius, Phipps doesn' t gloss over the actor' s missteps. . . Cage' s legions of devotees are in for a wild ride. " --Publishers Weekly"[Age of Cage] proves to be a surprisingly intriguing read, written in an accessible, magazine-like style. Fans and detractors alike will find films to revisit and new things to ponder about Cage' s protean career. " --Library Journal

Keith Phipps joined The A. V. Club in 1997 and became its editor in 2004. Keith later launched the influential movie site the Dissolve with Pitchfork in 2013 and served as editorial director for film and TV at Uproxx. He is currently a regular contributor to GQ, Vulture, TV Guide, and The Reveal, a film review site he created with longtime collaborator Scott Tobias. His work has also appeared in the New York Times, Polygon, the Ringer, the Verge, the Daily Beast, Rolling Stone and on NPR.